The Beginner's Guide to Piano Chords

Understanding the basics of how to play piano chords.

In this guide, we'll cover everything you could ever need to know about playing chords on piano. You’ll learn all the basics of how to play piano chords, why they’re important, and how to start building them.

What is a piano chord?

Put simply, a piano chord is formed when two or more notes are played on a piano or keyboard at the same time. 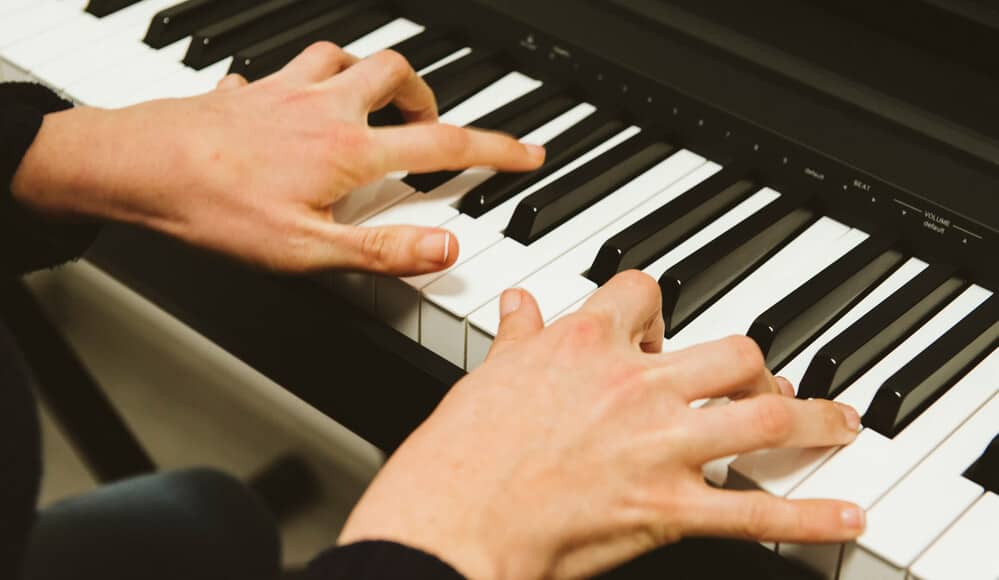 Some piano chords can be very simple to play, consisting of just two or three notes. Others are more advanced, requiring the player to use multiple fingers in both hands simultaneously in order to create the desired sound.

Understanding the basics of how to play piano chords and learning how to move from one chord to the other with confidence is your key to becoming a truly great piano player. And the really good news? Everything you could possibly need to learn about piano chords is right here in this guide.

Why are piano chords important?

Whilst it’s true that virtually every professional piano player will be able to read sheet music to a good standard, learning piano chords can be an incredible way to fast-track your playing ability without having to dedicate years of your life to mastering music theory.

Even with just a handful of chords committed to memory, you will be able to play some of the best-known songs in music with new confidence and enthusiasm. It just takes a little bit of practise getting the hang of the basics.

Of course, the better your comprehension of music theory, the better your ability to learn and play piano chords will be. But understanding the fundamentals of moving effortlessly from one chord to the next is the best way to fast-track your piano-playing ability.

Learning piano chords is by far the quickest way of up-skilling yourself to becoming a truly great piano player.

To give you a head start, the chart below shows you how to play a large number of piano chords in various key signatures. Download our free printable piano chords chart PDF for beginners now!

This is by no means a total list of all chords available to play on the piano. (You’ll find a complete breakdown of every chord in Chapter 5 of this guide). But as a way of getting started, the chart below covers the basics and beyond.

Even the chords listed above can be a little over-whelming for beginner piano players! If you want to know which chords are the most important whe you’re just startin gout, the list below covers the most popular piano cords you’ll need to learn when you’re starting out.

What are major piano chords?

Major chords have a happy and joyous sound to them, and are extremely popular in music. In fact, you’ll hear major chords being used in virtually every song ever written – even the sad ones!

Therefore, learning how to play all the main major chords listed below is a great first step to becoming a proficient piano player.

How to build major piano chords

Major chords are built by playing the 1st, 3rd, and 5th notes of a major scale. For example, in a chord of G major, you’ll need to play:

We’ll go into more detail on how to build piano chords in Chapter 3 of this guide. But for now, use the cheat-sheet below to identify the notes required to play the most popular major chords on piano.

What are minor piano chords?

Minor chords have a sad and gloomy sound to them, and are used just as commonly in music as major chords are.

Therefore, it’s an extremely good idea to learn how to play all of the main minor chords below as well as the major chords that were listed above.

How to build minor piano chords

Minor chords are built by playing the 1st, 3rd, and 5th notes of a minor scale. For example, in a chord of A minor, you’ll need to play:

Use the cheat-sheet below to see what notes required to play some of the most popular minor chords on piano.

In both major and minor chords, the 1st and the 5th notes are always exactly the same. It’s only the 3rd note in the middle of the chord stack that changes.

What are the names of the white piano notes?

When you look at the piano keyboard, you will notice that the white notes are ordered in a simple reoccuring pattern.

This pattern reveals a total of 7 different white notes, before the pattern repeats itself again.

Each of these white notes is assigned a letter of the alphabet, starting with A and going up to G.

After finishing at G the pattern restarts at A, and so on.

What are the names of the black piano notes?

The black piano notes are called either sharps or flats. Their name can be identified by looking at the closest possible white note and figuring out whether or note the black note is to the left of the white key, or t the right.

Piano scales and chords are very closely related. The main difference is that a chord is formed by selecting certain notes from a scale and playing multiple notes simultaneously. But in a scale all that notes are played in order, one at a time.

To help break it down, let’s first understand what we mean by the word “scale”.

What is a music scale?

For example, here is an ascending scale of D major on piano:

What’s the difference between a chord and a scale?

Alternatively, a chord is where only certain notes from the relevant scale are played, only instead of one note after the other, the player is required to push down all required keys at the same time.

Often, you’ll see chords written with additional numbers placed after each one. For example, D7, F#6, and Am7.

These numbers slightly alter the emotion of the chord – sometimes producing a more melancholy sound, other times more relaxed, or jazzy, or suspenseful.

We’ll examine some of the different chord variations and the emotions that they provoke in chapters 3 and 4 of this guide.

Congratulations… you made it to the end of part 1 of this guide! You now know the basics of what piano chords are, why they’re important, and how to start building them.

Hopefully you are feeling confident enough to sit at the piano and take your next step to discovering the joy of expressing yourself by playing chords.

In the next chapter, we’ll look further into how piano chords are formed, which chords work well together, and which fingers to use when playing piano chords.

See you on the other side.

The Beginner's Guide to Piano Chords

Everything you need to learn how to play chords on piano